Not seen, not heard: In slum evictions, children are some of the worst hit

“The first time a bulldozer came to our place, I was scared and kept sitting near our belongings that had been thrown out,” says Roshni, a ten year old whose family migrated from Bihar to Delhi looking for employment. Roshni and her family have been living in a slum in Yamuna Khadar’s Belagaon in the capital’s eastern region. The settlement is right behind Rajghat, the memorial dedicated to Mahatma Gandhi. Between 2011 and 2018, the houses and the small farms of the dwellers had to face frequent eviction drives by the Delhi Development Authority (DDA).

Children in these fragile communities are amongst the worst hit by slum demolitions. They miss out on education, dropping out of school due to homelessness, uncertainty, and the stigma they face in schools as “slum children”. Caught in a cycle of poverty and growing up with the violence of forced displacement, their future is one of unemployment or poorly paid jobs, not to mention underage labour.

Lakshya Aakriti Foundation (LAF), a not-for-profit, runs informal schools for them in Belagaon because often having to shift from one place to another severely hampers schooling. Diptesh Singh of LAF explains, “We have been associated with this place since 2012. The area faces around four demolitions per year. One demolition takes place in a staggered manner over several days. So for the entire period the families, including the children, stay around their homes in case the bulldozers return. And it is not as if children’s school calendar is taken into consideration when homes are demolished. Children end up missing many days of school at a stretch or dropping out altogether.” 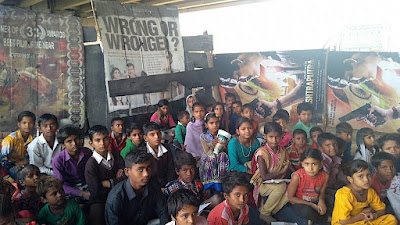 Children of Belagaon attending a school run by LAF

This year Roshni saw DDA officials in her area again. But this time she was quick to act: “I carefully dismantled our makeshift home, carried the lighter things outside the house with my younger brother, called up my older brother, and waited for him to come and take the heavy stuff out.”

Despite the trauma associated with demolitions, some children feel it is better to stay on and claim their rights to the land their ancestors have lived on since before Independence. Being close to the Yamuna river, the area is different from most urban slums in its greenery and fertility, and many residents depend on farming for their livelihood. Abdul and Rohit, both about 13 years old, are friends reluctant to shift to another locality. Abdul explains: “There is open space for us to play cricket. Neighbours share fresh vegetables they grow.” But he rues the fact that it takes months for families to get back to farming after bulldozers have run over their crops.

When the JCB machines come to raze the houses to the ground, Abbas, 14, feels like “hitting those people till they run away”. “It would be so good if we can retain this land. Anywhere else we will have to pay rent, and buy cooking gas, while here we can use the wood available around.”

Abbas’s father, Shafiq, has an elder son who works in another city as a shop assistant. With the family facing either homelessness or the threat of it, the son had given up on education years ago. Being illiterate himself, Shafiq wants that at least Abbas should study well. In answer to a question about the line of work he wants to pursue later in life, Abbas replies with a blank eyed stare, “I’ll become whatever is written in my destiny.” Constant displacement has made him lose faith in the surety of anything and he believes that fate would decide his future.

With their right to housing taken away, children lose out on the right to education too

Sunayna Wadhwan has been an activist with organisations like Hazards Centre and Mobile Creches. In her experience of working with communities in slum clusters, she noticed many families don’t send children to schools so the kids can call and inform the parents if a demolition drive seems imminent: “When we conducted meetings, children would join and try to learn about what the future of their homes would be. Those who go to schools are often discriminated against. The school authorities feel these children won’t be able to stay in one area consistently and are reluctant to take them in. Once admitted, they have to face social stigma, like being made to sit on the last seats of the bus, because of living in slums. The proportion of students in higher education from such localities is low. A common trend for those who do study is to get enrolled for open or correspondence courses once they reach the college level. They realise that a college degree can be helpful in getting them jobs, especially through NGOs active in their area.”

Working with the Centre for Policy Research (CPR), Mukta Naik is an urban planner and architect. Remembering an incident of relocation of a community, she says, “The shifting took place close to children's board exams [considered a crucial test in an Indian child's school life]. Some children ended up losing the documents needed to appear for the examination.”

Resettlement also affects livelihood. Women working as domestic workers within the city are not able to find opportunities in the far flung areas where they are resettled. This affects the amount of spending on children's education, whether it’s about admission to a new school or traveling to attend the old one. The minute it becomes a question of a long commute, girls are made to drop out even quicker because of safety concerns. Sometimes they stay back to take care of the house or siblings, without being safe themselves in the cut-off areas they have been moved to.

Evictions also lead to absenteeism because there is so much damage to property that every member pitches in to put the household together. Children lose uniforms, bags and books. At a time when they have been rendered homeless, parents find it difficult to buy these things.

For the teacher in the school run by LAF in Belagaon, absenteeism is a regular concern. Once evictions/demolitions start occurring at regular intervals, children start dropping out. He says, “These children have to live in the constant fear of getting uprooted.” Shivani Chaudhry of Housing and Land Rights' Network, an NGO, recalls meeting a boy who broke down and started crying each time he saw a bulldozer. Demolition drives in Delhi’s slums have led to some children getting injured and others getting killed.

“The city sees adolescents in slums as potential abusers. But what about the tacit violence these children live with?” asks Enakshi Ganguly of HAQ Centre for Child Rights. “They grow up seeing their parents getting beaten up for fighting for their rights. The threat of children getting abused increases when resettlement takes place in remote areas and the jobs parents get closer to the city keep them out all day. Children are left to fend for themselves.”

Nazdeek is an NGO fighting for the rights of communities in slums. Jayshree Satpute, Nazdeek’s co-founder and lawyer, talks about litigation’s role in helping eviction affected people, “When the court comes up with a favourable order, like ordering authorities to make anganwadis (day care centres) for children, it happens after a year or so but also with results like two centres being close to each other, rather than in different localities.”

The staff of these anganwadis are also not motivated. They have been fighting for better wages and recognition as government employees, and not volunteers. Working in slums is not lucrative because they get incentives if children have regular attendance. “In an area facing forced migration, this regularity takes a toll,” Jayshree adds.

Bipin Rai is a member of the Delhi Urban Shelter Improvement Board (DUSIB), a government body in charge of looking after slum clusters and their resettlement. He says, “Evictions are not legal. That is why we resettle and rehabilitate. But DDA and the Central Public Works Department do not cooperate or partner with us when it comes to land under them.”

However, like Rai admits, DUSIB too is not directly engaged with looking after the social aspects but is involved more in the infrastructure of resettlement colonies. Sudeshna Chhatterjee is the CEO of a trust called Action for Children’s Environments. In her paper ‘Children’s Role in Humanizing Forced Evictions and Resettlements in Delhi’, she describes the active participation of children in resisting the Gautampuri evictions in the year 2000. It had brought to attention children’s problems and gained them greater participatory space. But to look after the complete social, educational and psychological well being of children facing displacement, special focus on children in city planning for changes to be made at the policy level is something urban planners, researchers and activists continue to advocate for.

India has ratified the United Nations Convention on the Rights of the Child. But in the current Draft National Child Protection Policy framed by the Ministry of Women and Child Development, the mention of children in vulnerable circumstances, like those exposed to evictions or forced migration, remains missing. This gap reaffirms lawyer-activist Jayshree Satpute’s statement, “The elite classes want every opportunity for their children. But they don’t extend the same principles to other classes.” CPR’s Mukta Naik has something similar to say, “The Delhi Development Authority's perception of the city is elitist . . . and slum children have no place in this vision.”

(Names of children have been changed to protect identities.)