If you live at a place where fogs do You'll know sometimes people keep walkingNot because they can see clearly ahead But because that's what they know.
Where fogs descend, the temporal nature of promises is known the best:Affirmations are mouthed only to vaporise the next moment.People stick together in any way To barricade the winter.

Before they knew campaigns and street plays,Before they developed calluses that mocked pedicures,My smooth kidfeetHad discovered that putting one step after anotherCould take me a long way.
Smug feet, cool ground,I thought the ants were in my wayAnd had to be remindedAbout who's who in the scheme of things.
My feet (con)descended on them with complacenceAnd a moment became large enoughTo simultaneously contain both:The smell of liquid ironAnd the sting of the point from where it oozed.
I'd like to say I always learn my lessons quicklyBut to give credit where it's dueMy teachers were sharp.
And whenever someone exhorts meTo magnify my lifeI think that, actually,I only need to be precise.

You think you are safe
Because you and the bosses
Comprise the majority
But have you discussed this with them?
Have you told them about yourself,
About everything that makes you,
And checked if they consider you
A part of them?

And have you enquired
If you would still be all equals,
All the same, no hierarchies,
Once the extras are done away with?
Or would there always be some lows,
Because the highs need to be distinguished?

Farmers in Punjab are saving the climate by bringing back millets

“When I planted ragi, I did not do weeding. I did not water it. I did not even know people would want it for their consumption. I just put up some pictures and I had people asking for it,” says Sherpur Kalan’s Raspinder Singh practising his organic farming in Ludhiana district in Punjab. In 2017, he had six quintals of millets in a little more than half acre of his farmland. After preparing his field, he irrigated it once, did the transplantation and did not water it again.

This is vastly different from Punjab’s agrarian reality where rice is predominant. Punjab farmers are having to dig deeper and deeper for their submersibles to serve their water intensive crops. Methane emission from rice fields adds to climate warming, and the crop goes on depleting the groundwater because rice needs standing water. The government advises farmers to use water minimally but does not provide incentives for crops like millets that take little water and give high nutrition. 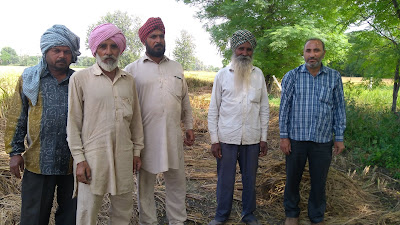 The state doesn't incentivise the growing of millets for farmers

Farmers like Raspinder are the exception but the sale of the millets they produce has proved that there is a market for them. Close to Punjab Agricultural University in Ludhiana is a mill where every day 80-90 kg of ragi or finger millet comes to be ground. Raspinder shares the reason: “CMC Hospital has recommended ragi to mothers; it has been suggested for bone issues as well as for obesity; patients who come for bypass surgery are learning that millets help fight blockage; diabetes patients are buying it.”

The planting of the seed

Raspinder studied engineering and taught the subject for a year. What did it take for him to develop an interest in millets? “I had an auto-immune disease and went to Kerala for my treatment. I was asked to have ragi and eventually I got cured. I went to a conference in Indian Institute of Millets Research, Hyderabad, and got to know of how millets are used in naturopathy. In Guru Nanak Dev University in Amritsar, Punjab, I heard Professor Hardeep Singh Gujral talk about how millets benefit us. The domestic worker at my place also knew about it.” To bring back the beneficial, rich millets that everyone seemed to know of at some point but had forgotten, Raspinder decided to start growing them himself. He also distributed free seeds to interested people.

Challenges and learnings on the journey

Ragi is not the only healthy millet. Bajra (pearl millet) is high on energy. Foxtail is easily digestible. Rotis made from browntop millet do not get spoilt for several days. They are all fibrous and keep intestines healthy. Since they are slow in releasing carbohydrates (wheat energises the body quickly), they ward off hunger for a long time without leading to obesity.

It is, however, not equally easy to grow all of these, as Raspinder discovered. Parrots feasted upon all the bajra he grew. Since farmers around him were not growing it, the birds only had this one farm to descend on to devour their favoured food. Apart from ragi, all other millets are also similarly vulnerable to attacks from different creatures.

The people who had taken seeds from Raspinder are now growing their own ragi. This means there is more ragi for consumers, which is a good thing. But it also means that a bigger market is needed for producers like Raspinder, who could sell all his output last year but not this year. In talks with someone who wants to buy ragi in bulk for making malt, he had a discussion with his fellow farmers. The consensual decision was that they should at least get as much as a paddy farmer gets.

Growing of ragi is labour intensive. The harvesting is primarily a manual process. On an average, these farmers are growing about eight quintals per acre and want to be paid a minimum of Rs 65 per kg. Raspinder says it is completely reasonable: “Two years back the price of non-organic ragi was Rs 80 per kg. It must have gone higher by now.”

Millets are not commonly grown in Punjab, not currently, at least, so there are no role models and it is all about experimenting and learning. The worker on his farm advised Raspinder to sow ragi in May. Later Raspinder saw that the yield was higher the year he had planted it around July. He then realised that since his worker is from Bihar, where monsoon arrives early, the right time for ragi in the two states would be different. He decided on the second half of June as a good time to start the plantation. Keeping a gap between the plants also gave them space to grow better and the production was higher.

The urgent need for state support and incentives

Apart from its low requirement of water, millets are also a kind of crop that provide the farmer with a rewarding yield, which chemical fertilisers and pesticides cannot improve further. So it is also not adding to the adverse effect of chemicals on Punjab on its water, soil and people’s bodies. Despite all its advantages, for millets to really take off and for Punjab to make a shift away from water-chemical intensive, climate unfriendly agriculture, incentives and awareness generation by the government is necessary. While the stated minimum support price for millets has been increased, like with any other crop, active procurement and distribution through government schemes is what would make the crop a popular choice for producers and consumers alike.

First published in Beyond Headlines, 30 Nov.