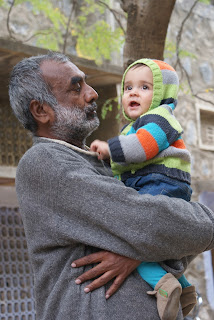 Vasu with his grandson, Rahul

In February 2010, sitting next to me during tea time in Tilonia village, Rajasthan, where he lived and worked as a member of the Social Work Research Centre, Vasu smirked, "Most people here are scared of me, you know." As a hobbyist who challenges smugness, I was quick in dismissing his claim,"Oh, please. That's not going to work on me." With his towering frame, longish, grey hair and gruff exterior, 'Vasu Baba' did seem capable of swallowing some pestering woodpecker alive when he knitted his brows. But we also resort to issuing disclaimers about ourselves as part of our vulnerability. His warning probably meant that he couldn't be bothered with, as Wodehouse put it, 'ordering his behaviour according to the accepted rules of civilised intercourse'. But that didn't change the fact that he was a captivating conversationalist. I could listen to him at length and not get bored. After this first tea-table talk we had, I was flattered that he decided I was a 'match' and could be allowed entry into the friend zone.

It is only when writing this now that I realise our mail exchanges were curiously in polite, correct Hindi, though when we met we mostly talked in English. Maybe it was the language of Tilonia that had percolated in our correspondence, since that was where our friendship began and that is where we would meet. We had met during the Lok Utsav, a festival of traditional Rajasthani music, organised by the SWRC. And music remained a constant motif between us. A guitarist in his youth, he was into a variety of music. I would send him the latest Hindi film songs that showed some innovation in music and lyrics; he introduced me to Alexi Murdoch's 'Orange Sky'.

Whenever Rajasthan went through dry spells, concerned for his Tilonia family in particular and for the state in general, he used to ask me to send clouds. I would go through a speedy, willing suspension of disbelief and convenient resurrection of belief to fervently add my prayers to his wish. A remarkable number of times, it worked. We would share solidarity when we would be sick and working, when I would be editing and he would be writing funding proposals for the organisation, and make plans about when we would meet next. Though he wasn't usually supposed to travel and exert himself, during one of his better days he came to Delhi and stayed at my place. Another friend had come over, but Vasu, naturally, was the life of the party, revelling in the conversations and jubilant that he had finally been able to visit the city after so long. Though he was the one living in a village, he was aware of national and international developments better than many of us were. He would draw for us significant connections between these happenings. I was once editing a dull, academic book on the Sri Lankan political history. When he heard about it, he said he doesn't know much about the issue but what he did think was . . . And thus he managed to make me take a more active interest in the book. His pro-poor stand was clear as he challenged Adam Smith:

The Market…
is it that bad?
well, Adam Smith thought that all nations were wealthy
but poor guy, he forgot to fly to Bangladesh

I turned to his consistent friendship during ups and downs in personal relationships. I wouldn't share details and he wouldn't poke and prod. But without saying anything he would reassure through his mere presence. He had that kind of immaculate grace. Indignities disturbed and saddened him. For a free spirit like him it was difficult to be restricted to one place because of being unwell and he would often grow irritable, and later guilty. Worried about something he felt he shouldn't have said to a couple of people, on World Forgiveness Day (until then I didn't know one existed), he wrote to many of us asking for forgiveness for anything hurtful he might have done or said. On days when I was struggling not to get sucked into a quagmire of editorial work, he would patiently enquire after me without feeling offended that I couldn't reply to his last two mails. As we grow older, we all know how valuable someone like that is, who would regularly check to see if all's fine with your world. Yet he always talked of being grateful for the people in his life: his Tilonia family; his daughter, son-in-law and grandson; the friends he made while working with SWRC and his JDs (judwaan dost, or twin friends, who, he said, were like his own extended self), of which I was proud to be one. He would say that as JDs even when we weren't talking we were connected by ESP (extra-sensory perception).

In his friendship he was characterised by absolute generosity of heart. Soon after our first meeting, I had joined a new workplace and was still getting to know my colleagues. Vasu made the job smooth for me by sending a packet of balushahis to my office, distributing which I said my hello to all the staff members and found my driving trainer, who was also to become a great friend later. Since the person from Rajasthan who had come with the sweets was wearing a turban, many in office assumed I was from that state, and in a way I was too. Vasu had also remembered to send some chai masala, because I was a fan of the tea I had at his place. He was a special common bond between me and my partner, who shared with Vasu his interest in music and cricket, and memories of an angsty youth.

One of my teachers had rightly talked about how it is easier to give solace to someone in sorrow but tougher to share their happiness, to feel it for yourself. Vasu had the knack and I sorely miss sharing my happy days with him. When someone goes, there are always thoughts of how you could have spent more time with them. But like Vasu I guess I should always count my blessings and remember how fortunate I was in having known him, as my Bollywood-ish mind imagines him strumming under the orange sky. When I recently spoke to his daughter Shruthi, she shared this feeling of being exceptionally lucky to have been a part of his life, "He taught me how to be accepting of all people and circumstances and this has been the most valuable lesson I have ever been taught."

On one of his birthdays, I made him a blog and he wrote over a hundred existential, dark, lyrical, witty posts on barefootrambles.blogspot.in. These are some lines from his poem 'Snapscapes':

Sepia prints memories mutations . . .
Trillions of bubbles in the air
Was it your breath that you blew?
No commotion, softly she comes
The harbinger of all that you dreamt
Daylight beckons, starshine travels . . .
Picture perfect reams of scenarios
Captured snapscapes.

An awesome tribute to a great friend!

A very absorbing saga of an unusually rich multi-dimensional personality.

A beautiful journey into your beautiful lives. Wish this post never had to end. It'll stay on with me for a while.

I was thinking of your post about a similar loss while putting it here.